On the 14th of August, a new chapter will be added to the history of Ordrupgaard. This day marks the reopening of one of the finest collections of French art in Northern Europe in a new extension by the award-winning Norwegian architect firm Snøhetta. The extension provides space for the entire French collection and safeguards the works for future generations.  Snøhetta’s building blends in elegantly with the existing Ordrupgaard buildings, entering into dialogue with the collections, the surrounding landscape, and the other buildings. Moreover, it has the appearance of a selfcontained architectural work, adding an innovative aspect and transforming Ordrupgaard into a museum destination of international dimensions.

Thanks to generous donations from private foundations and benefactors, Snøhetta’s building is finally ready to open its doors to the public. The building itself is located below ground and only a glistening steel roof in clear-cut geometric shapes is visible from the outside, welcoming visitors in the museum’s new forecourt. The extension consists of three new gallery spaces for the French collection plus two for temporary exhibitions. The latter form direct extensions of Zaha Hadid’s building, continuing this acclaimed architect’s striking idiom of black lava concrete and grandiose rawness. In contrast, the French galleries appear bright and gentle. Floors, walls, and coffered ceilings are covered with white-oiled oak only interrupted by pastel green walls forming a backdrop for the works. Hence the French gallery spaces present an almost classicistic transition from Zaha Hadid’s building (2005) toGotfred Tvede’s elegant stately home (1918) to which they form a passage. In this way, Snøhetta’s building creates a perfect ambulatory through the museum, taking visitors through the whole collection with the architecture accentuating the transitions, sharpening the senses as you go, and bracing you for new impressions.

Snøhetta’s building is set gently into the landscape. Only the steel roof marking the outline of the centremost of the three French galleries is visible from the outside. The sculptural shapes of the roof and its numerous facets refract the light in subtle anticipation of the impressionist works on show inside. Snøhetta’s building unlocks a wealth of associations, for example, the notion of a buried treasure chest.

Ordrupgaard possesses a unique collection of twentieth-century French art, including works by Monet, Degas, Renoir, Cézanne, Gauguin, and Matisse. These works have, over a number of years, undergone restoration to the tune of a multi-million sum granted by the Ministry of Culture. The new building designed by Snøhetta enables us to show the collection in its entirety while optimal climate, light, and humidity conditions will preserve the works for the future.

Due to lack of space, some forty per cent of the collection was previously relegated to storage, including numerous works likely to have occupied  places of honour in other museums. Enhanced lighting conditions now enable us to show a series of delicate pastels by great impressionist
masters such as Manet, Degas, and Renoir in a permanent hanging. These works are now doing their utmost to outshine one another like a row of glittering gems in the subdued lighting in the pastels gallery.

During the construction phase of Snøhetta’s building, the French collection
has been ‘touring abroad’ to Musée Jacquemart-André, France, Hamburger Kunsthalle, Germany, and the Royal Academy of Arts, England, to name but a few. Everywhere, it was critically acclaimed and extremely popular with visitors and it gives us great pleasure, therefore, to present the collection at Ordrupgaard once again.

Snøhetta’s building virtually doubles the exhibition space at Ordrupgaard, showing the entire collection to its best advantage which, besides the French collection, includes the Danish Golden Age, Hammershøi and his time, Finn Juhl’s House, and contemporary art in the open.

For the reopening, Ordrupgaard is pleased to present a new installation in the park by the Argentine contemporary artist Tomás Saraceno. The work Omega Centauri 3.9 hangs among a group of trees in the northern end of the park, drawing parallels to the roof construction of the new building with its geometric shapes and reflections. Snøhetta’s building underpins Ordrupgaard’s architectural profile, creating a modern museum complex with space for the collections, international temporary exhibitions, and a learning centre, plus a café, shop, and children’s room.

Snøhetta’s building is constructed under the proprietorship of the Palaces and Culture Agency and the entire museum has undergone an energy upgrade. The main contractor for the project is the consortium Juul & Nielsen A/S and Barslund A/S, HSM Industri supplied the sculptural steel structure, and G4S is responsible for the security installations in the museum. 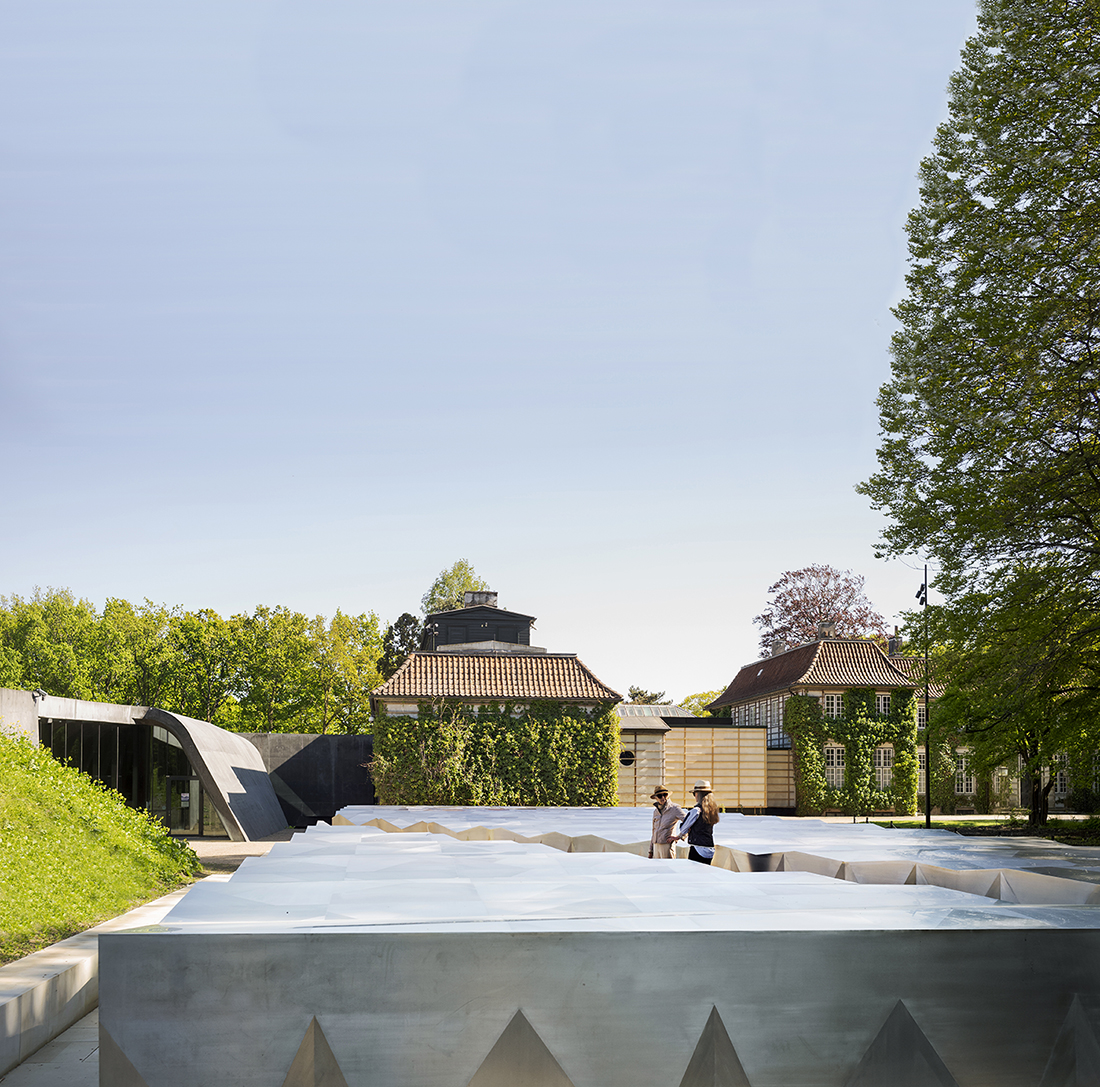