Discover one of the brightest stars of Swedish art history at Ordrupgaard. In 2014, we presented Carl Larsson’s colourful world and now the turn has come to Larsson’s close friend and artist colleague, Anders Zorn. Zorn’s repertoire is wider than Larsson’s, since he travelled far and wide in his capacity of internationally feted portrait painter and distinguished man of the world. Even so, Zorn, like Larsson, has been of great significance for the perception of Swedish culture through his portrayals of life in Dalarna. Based on local life – nature, homelife, and local traditions – he evokes timeless ideal images of the good life. Moreover, the works attest to a local social engagement and a belief in the importance of the local community. Themes that are highly topical in our own times.

The exhibition, collocating fifty works by Zorn plus a few items of furniture from Emma and Anders Zorn’s home in Mora, forms part of a series of exhibitions about Nordic artists’ homes at Ordrupgaard.

The Swedish artist Anders Zorn (1860–1920) was one of the best-loved and most acclaimed artists of his time. Already from a young age, he achieved great success on the international art scene with his flattering portraits of society’s bigwigs from art collectors and financial moguls to American presidents. However, there was another side to Zorn, far removed from metropolitan feted artists’ lives and high social circles. Throughout his life, Zorn always returned to his native area of Dalarna and the local life in which he was deeply rooted.

’I deeply long for the old peninsula, the best under the sun. Soon nothing else will do for me than things Swedish’ wrote Anders Zorn in 1884 in a letter to his betrothed, Emma Lamm (later Zorn).

Already in 1886, Zorn and his wife Emma bought a plot of land in his native town of Mora by Lake Siljan in Dalarna County. Ten years later, the couple settled permanently in this area. This became a turning point for Zorn, who now turned even more to Swedish nature and the Mora residents portrayed in their original environment. It was not a case of a nostalgic or romantic looking back to a world before it was thrown out of joint, but rather of empathetic and supportive portrayals of the local population, which Zorn himself felt closely associated with, nourished by a deep-rooted wish to pass on the cultural life of this area. The couple’s engagement in the region resulted, for example, in the establishment of Mora Folk High School which taught local music, dancing, cabinetmaking traditions, and textile art and, later, the setting up of Mora Open-Air Museum.

Zorn’s attachment to the area around Mora is manifested in atmospheric portrayals of the archipelago, the seasonal celebrations, the sauna, and popular Dalar culture. The works are, like Larsson’s, very significant for the understanding of Swedish culture. To the Zorn couple, Mora came to symbolise things that were unspoilt which, in contrast to contemporary industrialisation, emphasised local traditions and crafts. Now, hundred years later, their ideas appear visionary and relevant as a contrast to the rising consumerism. 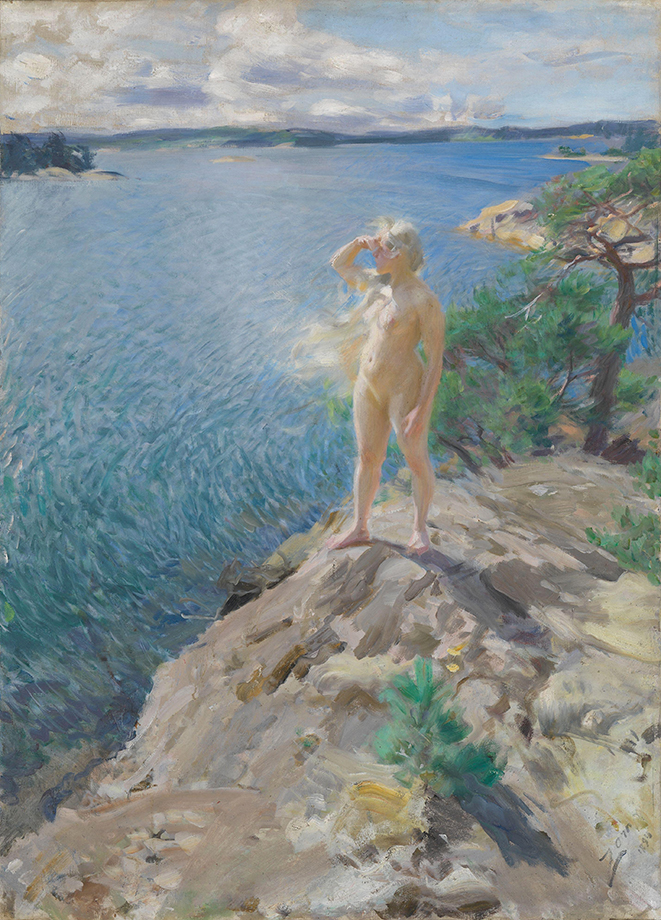